‘Coda’ is a small movie that hits all the right notes

Coda” is a small movie, exquisitely made. Touching, funny and stirring, it would be the kind of movie you’d urge a friend to run out and see, except they’ll only need to stay home and ante up to stream it on Apple TV+.The tech giant’s streaming service stepped up to buy the film for what Deadline reported to be a record sum coming out of the Sundance Film Festival, and at a moment where a lot of money’s being thrown around for such acquisitions — chasing awards prestige, attention or a little of both — this one actually looks well spent.The streaming environment also spares the film — which brings to mind the old Hallmark Hall of Fame TV movies — from competing in the rough-and-tumble of the theatrical space, although that also might exacerbate the challenge when awards time rolls around.

Adapted by writer-director Siân Heder from a 2014 French film, the title refers to an acronym for child of deaf adults — in this case, Ruby (newcomer Emilia Jones, an actress with a very bright future), a high-school senior who has served as the translator for her parents (Marlee Matlin, Troy Kotsur) and older brother (Daniel Durant), who is also deaf.

The title, however, also offers a nod to Ruby’s passion, which is, strangely enough, singing, a talent recognized and pushed by her new choir instructor (Eugenio Derbez), who presses her to really give her artistry a chance.The problem, alas, is that her family’s fishing business in Gloucester, Massachusetts, has hit a rough patch, and Ruby’s help navigating the hearing world appears more vital than ever. Moreover, the family is largely mystified, and even a little hurt, by her interest in an avocation that they can’t possibly appreciate. 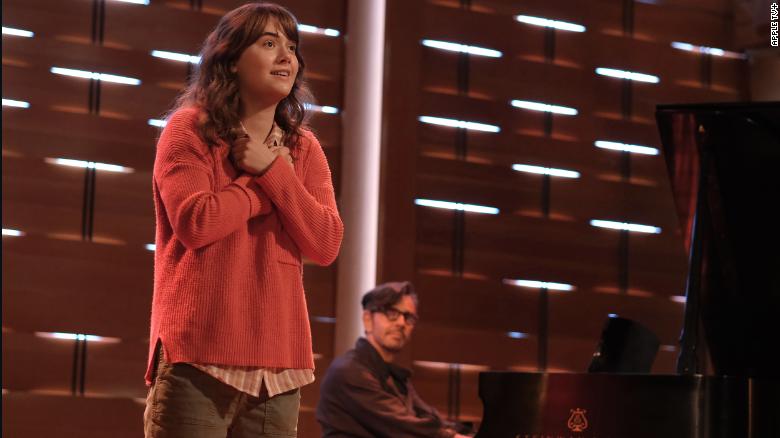 Emilia Jones and Eugenio Derbez in ‘Coda,’ which premieres on Apple TV+.”If I was blind, would you want to paint?” her mother asks.That’s just one of the many lines in “Coda” that resonate beyond a first viewing, such as Ruby recalling that she “talked funny” when she started school, lacking speaking models at home, and has had to deal with people mocking her family, noting, “They can’t hear it, but I can.”Like another recent indie film, “Sound of Metal,” “Coda” also makes brilliant use of sound, including the lack thereof, to illustrate the hurdles associated with being deaf in a hearing world. Perhaps most impressively, the film fleshes out all of the characters, even the cute classmate (Ferdia Walsh-Peelo) who prompts Ruby to try out for choir rather impulsively in the first place. (A scene where Ruby’s dad interrogates the lad, much to her chagrin, is among the comedic highlights.)What could feel cliched at various turns deftly avoids that, capturing Ruby’s plight in a way that recalls any number of coming-of-age stories while still feeling unexpectedly fresh and distinctive. There have been a number of first-rate movies about teenage girls in the last few years, but few that were better.

Granted, there’s a fairly long history of festival darlings that don’t shine as brightly once exposed to the harsh light of day. “Coda,” on the other hand, deserves all the applause — or any of the signs used to express approval — that has come its way.“Coda” premieres Aug. 13 on Apple TV+.