Reactions flooded in from across the globe as the Taliban encircled Kabul on August 15, forcing the Ashraf Ghani-led government to surrender & flee the country 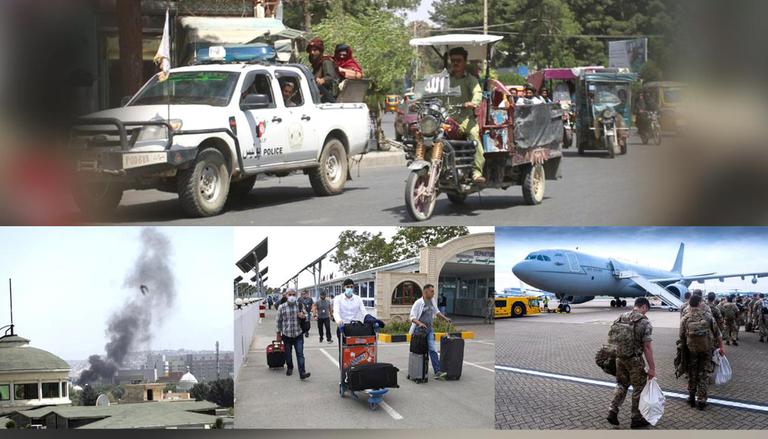 Reactions flooded in from across the globe as the Taliban effectively conquered Kabul without a fight, forcing the government to surrender on August 15 after over two decades. Afghanistan’s now-former President Ashraf Ghani has fled the country after resigning. Amid the Taliban’s rampant takeover, governments worldwide are attempting to evacuate their citizens and setups. Air India flight AI-244, which took off from Kabul earlier on Sunday with 129 passengers, also landed at New Delhi this evening. However, the future of the airline’s three-times-a-week schedule to the war-torn country now remains uncertain for understandable reasons. Here’s how the world reacted to the Taliban re-conquering Afghanistan

Pakistan’s foreign ministry office spokesperson Zahid Hafeez Chaudhri claimed to Geo News TV, “We’re concerned about the increasingly deteriorating situation in Afghanistan”. More tellingly, however, he added, “We have not taken any decision to close our embassy”, which makes logical sense since Pakistan is accused of having actively harboured and supported Taliban in its conquest.

European Union Commission Vice President Margaritis Schinas took to Twitter to issue a statement on Sunday. He said, “If there is one thing that the situation in Afghanistan and the actions of Belarus have shown, it is that the clock has run out on how long we can wait to adopt the complete overhaul of Europe’s migration and asylum rules we need.”READ | Ashraf Ghani flees Afghanistan as his govt surrenders to Taliban; likely in Tajikistan

United States President Joe Biden had issued a lengthy statement before the Taliban closed in on Kabul on Sunday and analysts thought that the insurgents would still take days before re-conquering the entire nation. While criticism against Biden is still at its peak, Biden not only assured that he was in touch with his national security team but also informed that 5,000 US troops would still be in the war-stricken country. Most of the blame for the present situation in Afghanistan was placed on the swift drawdown of American troops after its presence on foreign soil for 20 years.READ | UK PM Boris Johnson may call emergency Parliament meet over Taliban’s Afghanistan takeover

Again, prior to the Taliban capturing Kabul but still advancing to most of the country, Australia’s Prime Minister Scott Morrison had said on Sunday, “The situation in Afghanistan remains highly volatile and dangerous. We have been in close consultations with our allies and security partners, as we always have been, since operations in Afghanistan began in 2001. We are working closely with our partners to ensure a coordinated response, but we will not be discussing any operational plans at this point in order to maintain the security of those operations and of course, to protect those who are most vulnerable, who are the subject of those operations.”READ | Last day for women leaving home: Afghan filmmaker Sahra Karimi horrified at Taliban return

As the Taliban entered Kabul on Sunday, UK Prime Minister Boris Johnson was expected to convene an emergency parliament meeting to discuss the inevitable surrender of the Afghan government. As per reports, the British parliament is expected to be recalled this week. However, the timing is yet to be confirmed with the Speaker. Earlier, on August 13, when the Taliban’s takeover of Kabul seemed several days away, Johnson had said “we could see this coming for quite some time.”READ | Taliban takes U-turn; enters Kabul after Afghanistan’s ministers & security officials flee

Russia’s foreign ministry official Zamir Kabulov reportedly told the country’s news agencies, “we’re working on this” and added that a UN Security Council meeting on Afghanistan is expected to take place soon. Russia is one of the permanent members of the UNSC along with the United States, Britain, France and China. He also said that Russia is not planning on evacuating its embassy in Kabul saying that the Taliban had offered Moscow along with other unnamed nations security assurances.READ | Afghanistan soldiers who fled fearing Taliban receive warm welcome from Uzbekistan

Albania’s Prime Minister Edi Rama said in a statement that his country will offer temporary shelter to all the Afghans looking to flee the nation, now entirely under Taliban control. He said, “we have welcomed two requests from two highly respected societal institutions across the ocean, to evaluate temporary housing in Albania of several hundred people, from intellectual circles and Afghan activists, who are the first on the execution lists of barbarians of Afghanistan.” drama also said that Biden administration had asked Albania to serve as a “transit place for a certain number of Afghan political emigrants who have the United States as their final destination”. He added, “No doubt we shall not say no.”

Austria’s Foreign Minister Alexander Schallenberg reportedly said, “Conflict and instability in the region will sooner or later spill over to Europe and thus to Austria.” Meanwhile, Sweden also said that it would swiftly evacuate its embassy staff from Kabul.