The two Mideast nations Turkey and UAE have treaded on decades of bilateral tensions and rivalry, reshuffling the geopolitical order in Mideast and North Africa 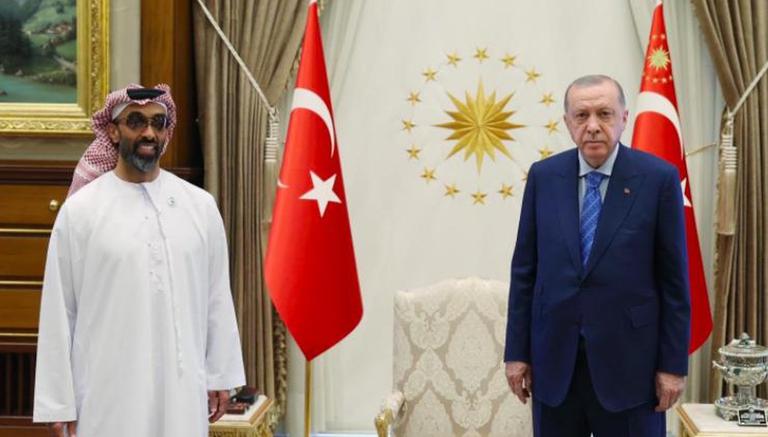 After holding a rare meeting with the United Arab Emirates (UEA) National Security Adviser Sheikh Tahnoun bin Zayed al-Nahyan, Turkish President Recep Tayyip Erdoğan, on Wednesday, said that relations between Turkey and the UAE have made “some progress” over the past few years.

Notably, the two nations have treaded on decades of bilateral tensions and rivalry, reshuffling the geopolitical order in the Middle East and North Africa and waging endless proxy wars in the Horn of Africa and the eastern Mediterranean.

On 18 August, although, embarking on a new era of enduring conciliatory rhetoric, President Erdoğan received Emirates’ National Security Adviser and the two headed to the Presidential Complex in Ankara for talks. Even as Turkey’s Foreign Minister Mevlut Cavusoglu had earlier asserted that there was “no reason” to mend ties with the United Arab Emirates even if UAE took a “positive step”, the Turkish leader, on Wednesday, argued that the instability in the regional diplomacy with allies and partners was “normal.”READ | UN Chief Antonio Guterres expresses sadness over loss of lives in disaster hit Turkey

This comes after decades of Ankara’s scathing attacks against the UAE lambasting its regional policies, which Turkey stated, were “absolutely not friendly.”  https://platform.twitter.com/embed/Tweet.html?creatorScreenName=republic&dnt=true&embedId=twitter-widget-0&features=eyJ0ZndfZXhwZXJpbWVudHNfY29va2llX2V4cGlyYXRpb24iOnsiYnVja2V0IjoxMjA5NjAwLCJ2ZXJzaW9uIjpudWxsfSwidGZ3X2hvcml6b25fdHdlZXRfZW1iZWRfOTU1NSI6eyJidWNrZXQiOiJodGUiLCJ2ZXJzaW9uIjpudWxsfSwidGZ3X3NwYWNlX2NhcmQiOnsiYnVja2V0Ijoib2ZmIiwidmVyc2lvbiI6bnVsbH19&frame=false&hideCard=false&hideThread=false&id=1428042252618813448&lang=en&origin=https%3A%2F%2Fwww.republicworld.com%2Fworld-news%2Feurope%2Fturkeys-erdogan-holds-rare-meeting-with-uae-official-says-bilateral-ties-made-progress.html&sessionId=357a307bb2c7dbb641705df2eacfbaeb13a1f869&siteScreenName=republic&theme=light&widgetsVersion=1890d59c%3A1627936082797&width=550px

In the rare de-escalation of the UAE-Turkey rivalry on Wednesday, Erdogan and UAE’s Zayed al Nahyan discussed bilateral and regional developments with a key focus on cooperation and economic partnerships between the two Islamic middle eastern nations, Turkey’s Communications Directorate revealed in an official statement. Former foreign minister and diplomatic adviser to the UAE President Sheikh Khalifa bin Zayed al Nahyan, Anwar Gargash, hailed the meeting as “historic and positive” on his official Twitter handle.READ | Death toll rises to 70 and over 40 missing as catastrophic flood ravages Turkey

“The UAE continues to build bridges and consolidate relations, and just as the priorities of prosperity and development drive our internal direction, it is also the locomotive of our foreign policy,” Anwar Gargash tweeted.

Addressing the Turkish press, President Erdogan said that the UAE was, in fact, considering making “serious investments” in Turkey if negotiations went as planned. “I am also considering meeting with Sheikh Mohammed bin Zayed,” the Turkish president said, expressing his desire to meet the UAE crown prince.READ | Erdoğan’s Turkey jumps to applaud ‘positive messages’ from Taliban for global galleries

Turkey’s dialogue with senior UAE officials is part of the country’s recent efforts in smothering ties with Arab nations and easing tensions over rival claims to Eastern Mediterranean waters, conflict in Libya and Yemen, and the Gulf disputes, and instead fostering economic cooperation.

“In this meeting we discussed what type of investment could be made in which areas,” Erdogan said in a television interview, adding that he plans to meet with the de facto leader of Abu Dhabi, Crown Prince Sheikh Mohammed bin Zayed, to further strengthen ties. “They have a very serious investment target, an investment plan,” the Turkish leader said.READ | Turkey reinforces border to curb potential exodus of Afghans fleeing Taliban insurgency

The recent meeting comes in the backdrop of Turkish Foreign Minister Mevlut Cavusoglu making a rare phone call to his Emirati counterpart Abdullah bin Zayed for exchanging congratulatory messages over the holy month of Ramadan. Reports suggest that Ankara has also been holding dialogue with Jordan and Israel via its intelligence agency to recalibrate bilateral ties.