Roads have been submerged in water and London underground stations have been forced to close, London Fire Brigade said that it had received more than 600 calls. 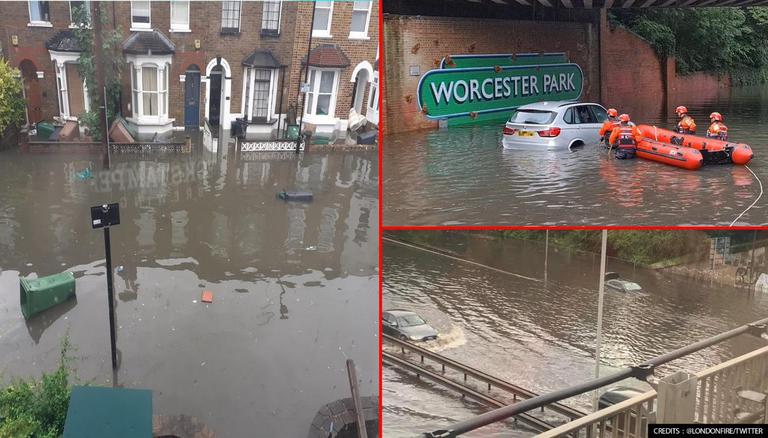 Heavy rains and thunderstorms have caused flooding across London. Roads have been submerged in water and London underground stations have been forced to close, reported US-based news agency. London Fire Brigade on Twitter said that it had received more than 600 calls to flooding incidents.

London Fire Brigade mentioned that there are reports of ceilings collapsing & vehicles stuck in the water. London Metropolitan police said that flooding caused disruption on the North Circular Road. The underground trains have been heavily flooded which led to disruption of services. A Transport for London spokesperson in an email statement to a US-based news agency, said that the flooding has affected the stations on the rail network. The spokesperson revealed that the bus routes, tubes, railway services have been affected due to the flooding.

Two London area hospitals, Newham Hospital and Whipps Cross University Hospital were experiencing issues due to floods. Barts Health NHS Trust in a statement said that Whipps Cross and Newham hospitals were experiencing operational issues due to heavy rains. The hospitals have urged patients to use alternative hospitals for urgent care. Newham Hospital hospital in a tweet said that their emergency services have been flooded in some areas. It added that people should visit other hospitals for care until they fix things in the hospital. READ | Foreign Secretary Shringla arrives in London for talks

We are experiencing operational issues @WhippsCrossHosp and @NewhamHospital due to the heavy rainfall. We are working closely with our local partners to resolve the issues and maintain patient care. Full statement here ➡️https://t.co/OG1Vlj5elE pic.twitter.com/dZMiCCAmkC — Barts Health (@NHSBartsHealth) July 25, 2021

Our Emergency Department has flooded in some areas. We’re still here if you need us but to help us while we fix things please attend a neighbouring hospital if possible. Thank you! pic.twitter.com/AMCDQ6MEQT — Newham Hospital (@NewhamHospital) July 25, 2021

The Meteorological Office had issued an amber weather warning across London on Sunday, July 25. The weather agency had said that heavy rains and thunderstorms will affect parts of southeast England for the next hours. The warning was in effect until 7 pm (local time) on Monday, July 26. London’s Metropolitan Special Constabulary in a tweet on Sunday advised people to avoid going through floodwater and take different route. People have shared pictures and videos of the flooding on their social media accounts. READ | Vatican discloses its property holdings for first time ahead of London investment trial

An Amber #thunderstorm warning is in force until 1900 👉 https://t.co/QwDLMfRBfs

There’s is quite a lot of flooding in London tonight. If you see deep water, please DO NOT try to get through. Rescuing people uses a lot of resources, and so it’s wiser to apply good judgement and find a different route. #WestRPT pic.twitter.com/pBFFR0ZnJw — MPSSpecials (@MPSSpecials) July 25, 2021

My local community really stepped up to the plate after not getting any help from our local council; we found sand and made our own DIY sandbags for those houses affected by the floods. We then unblocked most of the drains so the water could subside #londonfloods #londonflooding pic.twitter.com/wOPDcqeFhj — Kingy (@HistoryNut30) July 25, 2021