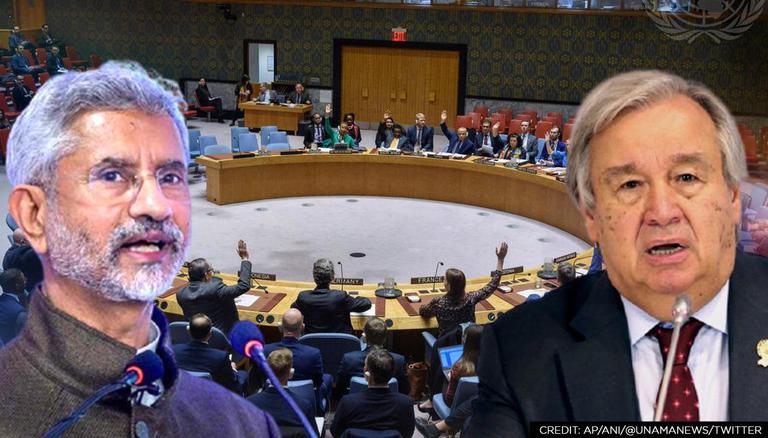 India’s External Affairs Minister S Jaishankar on Wednesday chaired the United Nations Security Council Open Debate on Technology and Peacekeeping in the presence of UN Secretary-General Antonio Guterres and other participating nations. Under Indian Presidency, the Security Council unanimously adopted for the first time a resolution ensuring accountability for crimes committed against UN peacekeepers. Notably, it is the first such UN Security Council Resolution that calls for prevention, investigation, and prosecution to bring the perpetrators to justice.

“We are pleased to inform that the Council has adopted a Resolution on ‘Accountability of Crimes against UN Peacekeepers’ as well as Presidential Statement on ‘Technology for Peacekeeping’, the first such UN Security Council document on this topic,” said S Jaishankar after the resolution was passed.

During the open debate at the UNSC, Jaishankar underlined the role of technology in the safety of UN peacekeepers and highlighted the role that they play in maintaining peace and tranquillity.

The 15-member powerful UN body is currently under India’s Presidency for the month of August. India is one of the largest troop-contributing countries to UN peacekeeping missions and has contributed more than 2,50,000 troops in 49 missions over the years.READ | Taliban breaks promise; brutally thrashes Afghan Translators who worked for foreigners

S Jaishankar at UNSC open debate on terrorism and peacekeeping

Addressing the UN body, Jaishankar said that the UN peacekeeping missions continue to operate in a variety of challenging settings that involve terrorists, armed groups and non-state actors as he stressed on the need to strengthen the capabilities to secure the peacekeepers.

Since deploying for the first time in 1948, UN peacekeeping missions continue to operate in a variety of challenging settings. This could involve armed groups, non-state actors, and terrorists, he said.READ | Anti-Taliban movement gathers pace; thousands take to streets with Afghan national flags

Because the nature of peacekeeping missions and their attendant threats have become more complex, it is vital that our capabilities to secure the peacekeepers keep pace.

We owe it to them to ensure that our protective efforts meet the highest standards, Jaishankar said.

Jaishankar also proposed a four-point framework that would lay out architecture for securing UN peacekeepers to meet contemporary threats.

These must also prioritise mobility, both in the sense of agile manoeuvrability of mission assets and in the sense of the use of mobile digital/IT platforms, said Jaishankar adding that technologies should be environment-friendly through the use of renewables and fuel efficiency, and use of environmentally-friendly construction materials.

A reliable, high-fidelity means to collect, use, process, and share information and data will create advantages from the start for peacekeeping missions. Precise positioning and overhead visualisation of mission environments are critically important to provide intelligence and enhance the safety and security of mission personnel, the External Affairs Minister stated.READ | Afghanistan musters ‘Resistance’ against Taliban; Republic accesses videos from Panjshir

This also includes strengthening of communication within missions and enhancing overall capacity to take informed decisions at the tactical and operational level, he added.

External Affairs Minister of India S Jaishankar also announced that India is supporting the UN in the rollout of UNITE Aware Platform across ‘select peacekeeping missions’.

“It gives me great pleasure to announce that India is supporting the UN in the rollout of UNITE Aware Platform across select peacekeeping missions. It’s based on the expectation that a peacekeeping operation can be visualised, coordinated and monitored on real-time basis,” said S Jaishankar. READ | Taliban’s ‘say one thing, do another’ record on women’s rights leaves their fate uncertain

“21st-century peacekeeping must be anchored in a strong ecosystem of technology and innovation that can facilitate UN peacekeeping operations in implementing their mandates in complex environments, ” S Jaishankar further added.

Notably, the UNSC Peacekeeping open debate started with an introductory video on UNITE AWARE platform. India partnered with the UN and contributed USD 1.64 million in the roll-out of the UNITE Aware Platform. India is collaborating with the UN for the rollout of UNITE Aware platform in four peacekeeping missions in Somalia, South Sudan, Mali, and Cyprus.

What does UNITE Aware do?