The Mamata Banerjee-led government suffered a setback after the Calcutta High Court ordered a court-monitored probe into the West Bengal post-poll violence. 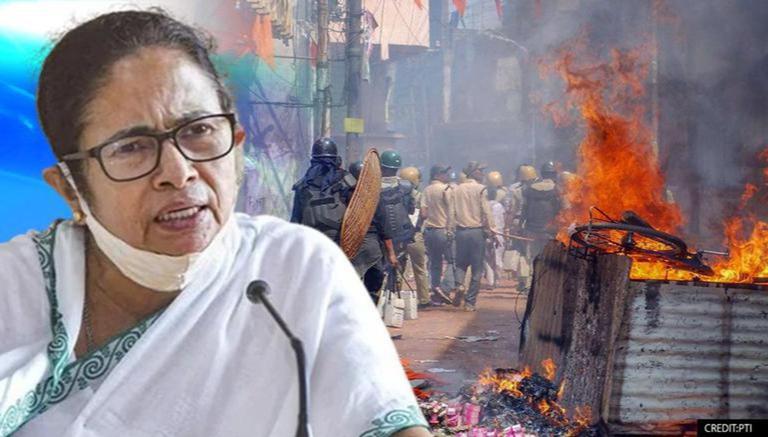 The Mamata Banerjee-led government suffered a setback on Thursday after the Calcutta High Court ordered a court-monitored probe into the West Bengal post-poll violence. The 5-judge bench comprising Chief Justice Rajesh Bindal and Justices IP Mukerji, Harish Tandon, Soumen Sen, and Subrata Talukdar has been hearing the plea of BJP leader Priyanka Tibrewal who alleged that over 200 persons have been unable to return back home owing to the continued threat to their lives. Thereafter, the court directed the NHRC chairperson to form a committee to examine all complaints pertaining to the violence.

In its report submitted on July 12, the NHRC committee had opined that the situation in the state is a manifestation of the ‘Law of Ruler’ instead of ‘Rule of Law’. Highlighting the “pernicious politico-bureaucratic-criminal nexus” in WB, it recommended that cases involving offences such as rape, murder etc. should be probe by the CBI and tried outside the state. Moreover, it suggested that the other cases should be investigated by a court-monitored SIT along with other measures such as ex-gratia payment, rehabilitation, protection to women and actions against government servants.

On the other hand, the Mamata Banerjee-led government urged the HC to reject these findings and asserted that this panel “was fraught with bias against the ruling dispensation”. Ruling that the allegations of bias against the NHRC panel doesn’t hold merit, the court directed that all cases of murder and crimes against women including rape will be transferred to the CBI. It also entrusted all other cases referred by the NHRC to an SIT comprising IPS officers Suman Bala Sahoo, Soumen Mitra and Ranbir Kumar. The bench revealed that the working of this team will be monitored by a retired Supreme Court judge for which a separate order will be passed later.

Directing the state government to hand over all documents and records to the investigative agencies, it warned that any obstruction in the course of the probe will be taken very seriously. Moreover, the WB government has been asked to immediately process applications for compensation of victims. While the CBI and the SIT have directed to submit their reports within a period of 6 weeks to a division bench of the HC which will hear the matter on October 24. READ | Cartographic error makes West Bengal villages mark August 18 as Independence Day https://platform.twitter.com/embed/Tweet.html?creatorScreenName=republic&dnt=true&embedId=twitter-widget-0&features=eyJ0ZndfZXhwZXJpbWVudHNfY29va2llX2V4cGlyYXRpb24iOnsiYnVja2V0IjoxMjA5NjAwLCJ2ZXJzaW9uIjpudWxsfSwidGZ3X2hvcml6b25fdHdlZXRfZW1iZWRfOTU1NSI6eyJidWNrZXQiOiJodGUiLCJ2ZXJzaW9uIjpudWxsfSwidGZ3X3NwYWNlX2NhcmQiOnsiYnVja2V0Ijoib2ZmIiwidmVyc2lvbiI6bnVsbH19&frame=false&hideCard=false&hideThread=false&id=1428234122489597953&lang=en&origin=https%3A%2F%2Fwww.republicworld.com%2Findia-news%2Fgeneral-news%2Fwest-bengal-post-poll-violence-calcutta-hc-orders-court-monitored-cbi-and-sit-investigation.html&sessionId=d9a66bc69410acff1955d110644bf9c4a220857a&siteScreenName=republic&theme=light&widgetsVersion=1890d59c%3A1627936082797&width=550px

BJP, Congress, CPI(M), TMC and ISF were up in arms over the violence which claimed at least 16 lives after the declaration of poll results. While the MHA sought a detailed report from the state government regarding the “post-election violence targeting opposition political workers in the state” and sent a 4-member team there, PM Modi called up West Bengal Governor Jagdeep Dhankhar and expressed his anguish at the law and order situation. Though TMC attributed the deaths to “intra-BJP fights,” Banerjee requested everyone to remain peaceful.READ | Explained: Independence day on August 18; West Bengal villages celebrate I-day on 3rd Day

Meanwhile, BJP president JP Nadda visited WB for two days where he met the families of the affected party workers in Pratapnagar, Beliaghata, North 24 Parganas and Gopalpur. In another development, CM Mamata Banerjee announced a compensation of Rs.2 lakh each to the kin of the deceased persons. She also warned that her government will act against anyone circulating “fake videos” on post-poll violence. Ignoring Banerjee’s opposition, the WB Governor visited violence-hit areas in Cooch Behar and areas of Assam where people from the state were camping.