UK based street artist and political activist Banksy recently took to Instagram to share an intriguing video of what he termed as ‘A Great British Spraycation’. 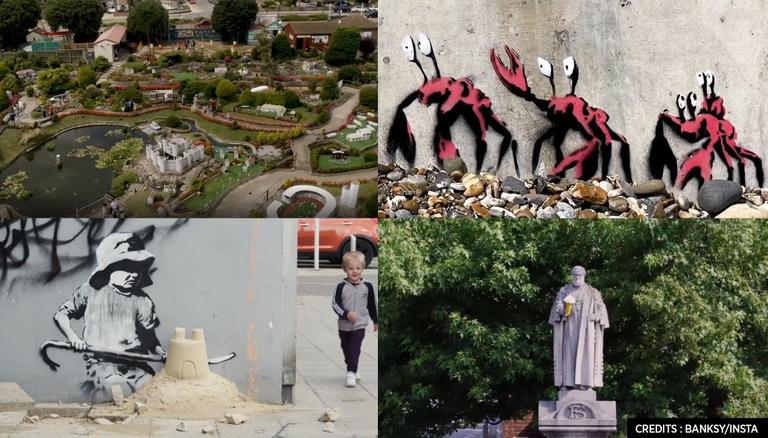 UK based street artist Banksy recently took to Instagram to share an intriguing video of what he termed as ‘A Great British Spraycation’. The internationally recognized artist recently toured the East Anglian county of Suffolk where he decorated walls with his signature graffiti. While Banksy, whose identity remains unknown, rarely admits his association to his artwork. This time he showcased the process of their creation.

The clip starts by showing Banksy stepping out on a beach with his art paraphernalia. Oblivious to the people around, he swiftly creates a rat drinking a cocktail before moving to his next destination. As the clip progresses, vibrant graffitis keep on popping up along the coast and over the border into Norfolk. Apart from the relaxing rat, other artworks include a boy making a sandcastle in Regent road, a seagull swooping on a skip in Denmark Road and a group of children together in a boat in Nicholas Everitt Park.

Since being shared on Instagram, Banksy’s graffiti has been viewed by more than 5,151,222 people and received a flurry of reactions. “I think my favourite is the bus stop but the miniature at the end is awesome too!”, wrote a user. “And there you are; hidden in plain sight! Bloody brilliant!” added a second. “Thanks for your art in my hometown (Lowestoft), I went and enjoyed them all yesterday.”, wrote a third. READ | Banksy’s painting for healthcare workers up for sale, expected to fetch millions for NHS

Banksy’s works, created anonymously across England, are among the most sought-after in the world. His satirical street art and societal commentary through dark humour graffiti have earned him a reputation and made him a well-known public figure. His identity, however, is still unknown, and he has been the subject of much speculation. His anonymity hasn’t prevented him from remaining relevant even amid the ongoing COVID-19 pandemic.READ | Oil painting ‘vandalized’ by Banksy to go under the hammer, expected to fetch up to $6.9mn

Banksy made £16.7 million through auction

This year, the unknown artist stayed out of the spotlight for the most part. It was claimed in March that he earned £16.7 million for health programmes by auctioning a painting depicting a youngster playing with a toy nurse. However, the artist may be making a resurgence thanks to street art installations in Suffolk, Gorleston, and Great Yarmouth, Norfolk. The artworks were not shared on Banksy’s social media accounts, but, his supporters were quick to comment on the characteristic style of the artist.READ | US: Sotheby’s accepts crypto payment at Banksy auction