On Saturday, eight people died in Turkey when a firefighting plane crashed and rescuers frantically searching for survivors of the flash flood. 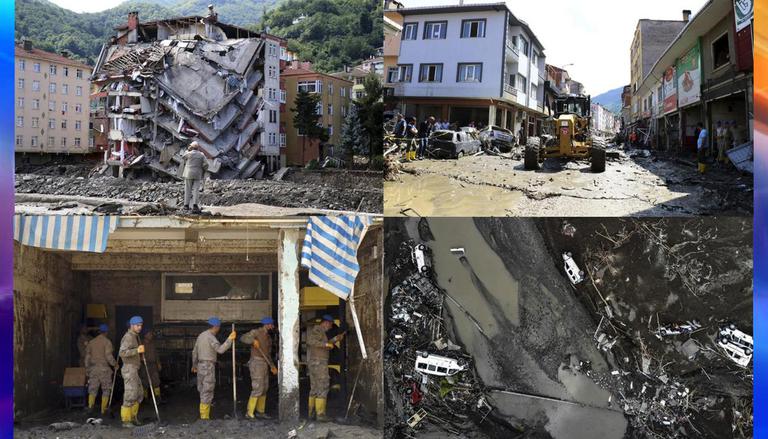 Turkey was hit by disaster on two fronts on Saturday, with eight people dying when a firefighting jet crashed and on the other hand, rescuers desperately looking for survivors of flash floods in the north that killed at least 55 people. On the fire-fighting operation, all eight passengers on the Russian plane lost their lives, according to Ankara and Moscow. The plane crash occurred as Turkey was regaining control of hundreds of flames that had killed eight people and devastated large swaths of woodland along the country’s picturesque southern coast. Natural disasters, according to scientists, are growing increasingly intense and frequent as a result of global warming caused by polluting emissions.

5 Russian military and 3 Turkish civilians were aboard Russian plane

Five Russian military and three Turkish civilians were on board the Russian Be-200 plane that went down around 13:30 GMT, according to the defence ministry in Moscow. A column of smoke could be seen rising from the isolated mountainous zone in Turkey’s south on television. According to a statement from Turkey’s defence ministry, the Russian aircraft took off from Adana to assist in the extinguishment of fires in Kahramanmaras province. The ministry noted that a surveillance plane and a helicopter had been dispatched to the crash scene.

Teams were digging through the remains of dozens of homes that collapsed owing to floods that rocked Black Sea districts on Wednesday after heavy rains, according to the official disaster agency AFAD. The floodwaters entirely damaged 40 houses and two bridges in the village of Babacay in the northern province of Sinop, according to state news agency Anadolu. The latest official death toll, released by AFAD on Saturday, was 55, with nine more people hospitalised. Turkey emerges as a frontline country in the fight against climate change. READ | World Archery Youth C’Ship: Indian Compound Cadet Women’s defeats Turkey to bag gold medal

Survivors of the floods have accused local officials of failing to provide adequate warning of impending storms. The fact that numerous structures were constructed in flood zones has also been criticised. One eight-story structure on the banks of the Ezine river in Bozkurt, Kastamonu province, fell. Survivor footage showed raging river waters filling the streets in a matter of minutes, sweeping away cars and traffic signs.READ | Turkey floods: Death toll rises to 44 after Northern Black Sea ravages several areas