The death toll in Haiti earhquake climbed to 304, while at least 1,800 people have sustained injuries following the quake. 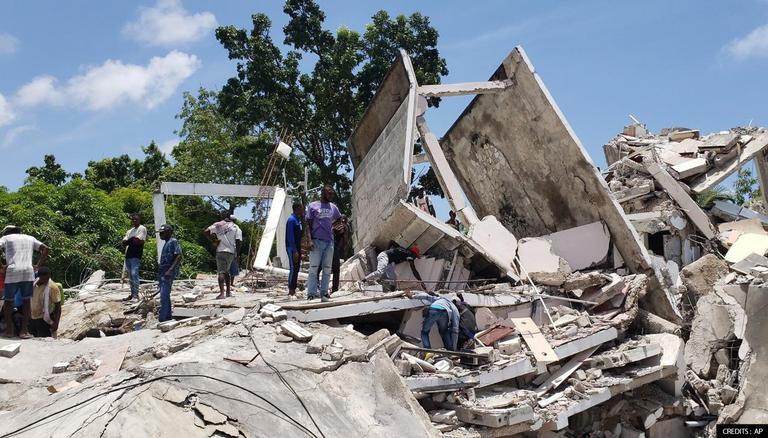 Addressing a press conference on Saturday evening, Chandler have details about the numbers of the injured persons in different places across Haiti. The official said that 160 people were killed in Haiti’s southern department; 42 in Nippes, 100 in Grand Anse and 2 in the northwestern region of the nation.

The agency gave some information via Twitter saying that the initial actions, which were carried out by both professional rescuers and members of the public, helped many individuals to be pulled out from the wreckage. The wounded are still being treated at hospitals. READ | 7.2 magnitude earthquake hits off the coast of Haiti

According to the United States Geological Survey (USGS), the quake struck on Saturday morning 12 km (7.4 miles) northeast of Saint-Louis du Sud, on Haiti’s southern Tiburon Peninsula, at a shallow depth of 10km (6.2 miles).

Taking to his Twitter handle, Haiti Prime Minister Ariel Henry said that a one-month state of emergency will be issued by the government. He stated that appropriate measures will be given to anyone harmed by the “violent earthquake” and the government will try to act quickly.   READ | 7.2 magnitude Earthquake hits Haiti; Tropical Storm Grace forecast to strike on Monday

The PM further said that medical requirements are their biggest urgency, adding that sending of medical drugs has been started by the government. Moreover, medical professionals have been positioned in the affected areas. The specific number of patients, who require immediate medical care, have been evacuated and rescue operations are currently underway. READ | 7.2 magnitude earthquake hits Haiti; at least 227 killed

It has been stated that the Western Department along with Southern Department, Nippes, and Grand’Anse will be under a state of emergency.

According to the National Hurricane Centre, the tropical storm Grace is expected to hit Haiti on late Monday night or soon Tuesday morning.