As devastating wildfires continue to char land in Italy and Greece, the European Union (EU) mounted one of its largest firefighting operations ever. 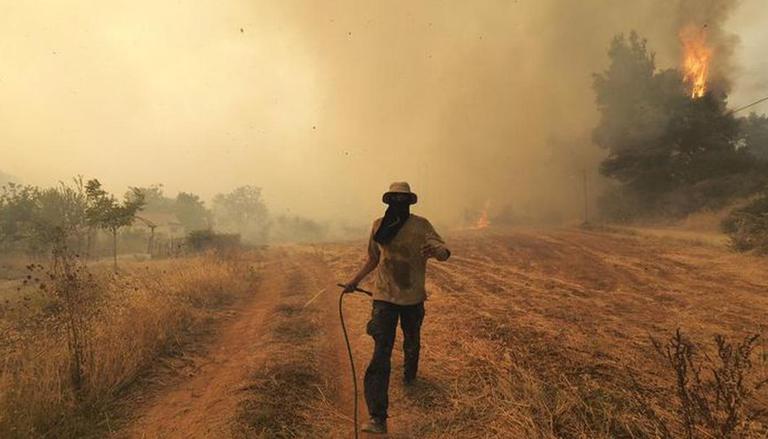 As devastating wildfires continue to char land in Italy and Greece, the European Union (EU) mounted one of its largest firefighting operations ever. As many as 586 fires had erupted in “all corners of Greece” in past week, according to country’s Prime Minister Kyriakos Mitsotakis, who on Monday apologised for his failure to curtail the blazes. Addressing Greek residents in a national broadcast, he vowed to reforest the burnt area and compensate for it in the form of a €500m emergency relief fund.

In Italy, civil protection authorities warned of more fires as the mercury touched 45 degrees Celsius in some parts of the coastal country. According to Guardian, firefighters in the country have dealt with over 44,442 wildfires in the country ever since they first started burning in the middle of June. Major affected areas encompass Sicily, Puglia, Calabria and Sardinia.READ | Greece: Hundreds of families left homeless as devastating wildfires continue to rage

The European countries have sent 14 firefighting planes and 1,300 rescuers to help put out devastating blazes across the Mediterranean. In a statement, Janez Lenarčič, the EU commissioner for crisis management reckoned that they were “mobilising one of Europe’s biggest-ever common firefighting operations as multiple fires affect several countries simultaneously.” In addition to the EU, Britain has also announced to send firefighting teams to dose fires in Greece.READ | German fire fighters depart for Greece

As many as 156 wildfires that erupted last week have charred hectares of land in the Mediterranean country of Turkey. At least eight people were reportedly killed by the blazes across Turkey as firefighters continued their effort to throw cold water on the fires. Last week, the EU had said that it mobilised the firefighting planes from Croatia and Spain to help Turkey extinguish the deadly blazes. The crew from Ukraine, Russia, Azerbaijan, and Iran has also been leading efforts in the burning regions. At least two water-dumping aircraft, one transport plane as well as 27 soldiers were dispatched by Spain to assist Turkey. Ankara’s President Recep Tayyip Erdogan’s government announced that a total of 16 planes, 51 helicopters, and more than 5,000 personnel were tackling the fires. READ | In PICS: Tragic scenes from Greece as wildfires rage, lead to mass evacuations